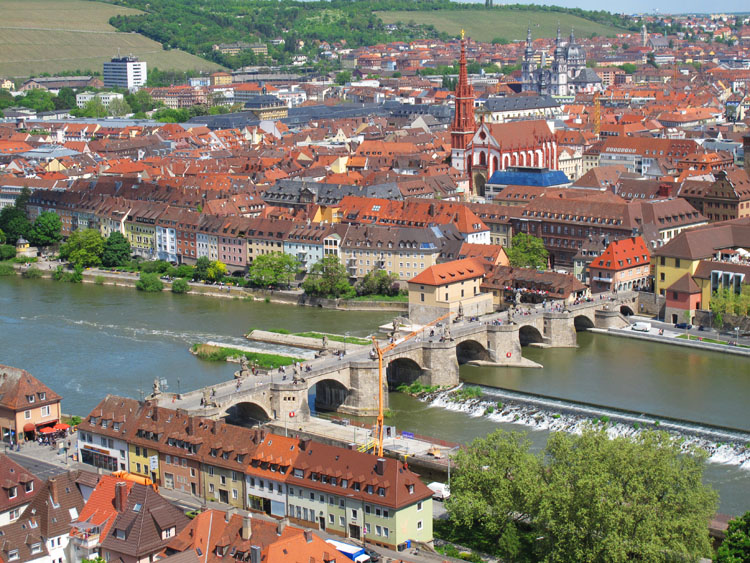 On 1 and 2 June IVR under the Presidency of Klaus Weber, representative of the German Association of Insurers (GDV), welcomed more than 215 members and guests from 8 different countries at the IVR Congress 2017 which took place in Würzburg. This city was chosen as congress location because of its central location between the Rhine and the Danube. The 25th anniversary of the Main Danube Canal, which connects the 2 largest rivers of Europe, was also being honored.

Day 1
After the Board and Committee meetings, President Klaus Weber officially opened  the IVR congress by the first time welcoming a keynote speaker who challenged the members and guests through an inspirational presentation on how to open up to changes and what kind of effect it has on people and organisations. In addition he shared the latest digital innovations and artificial intelligence. 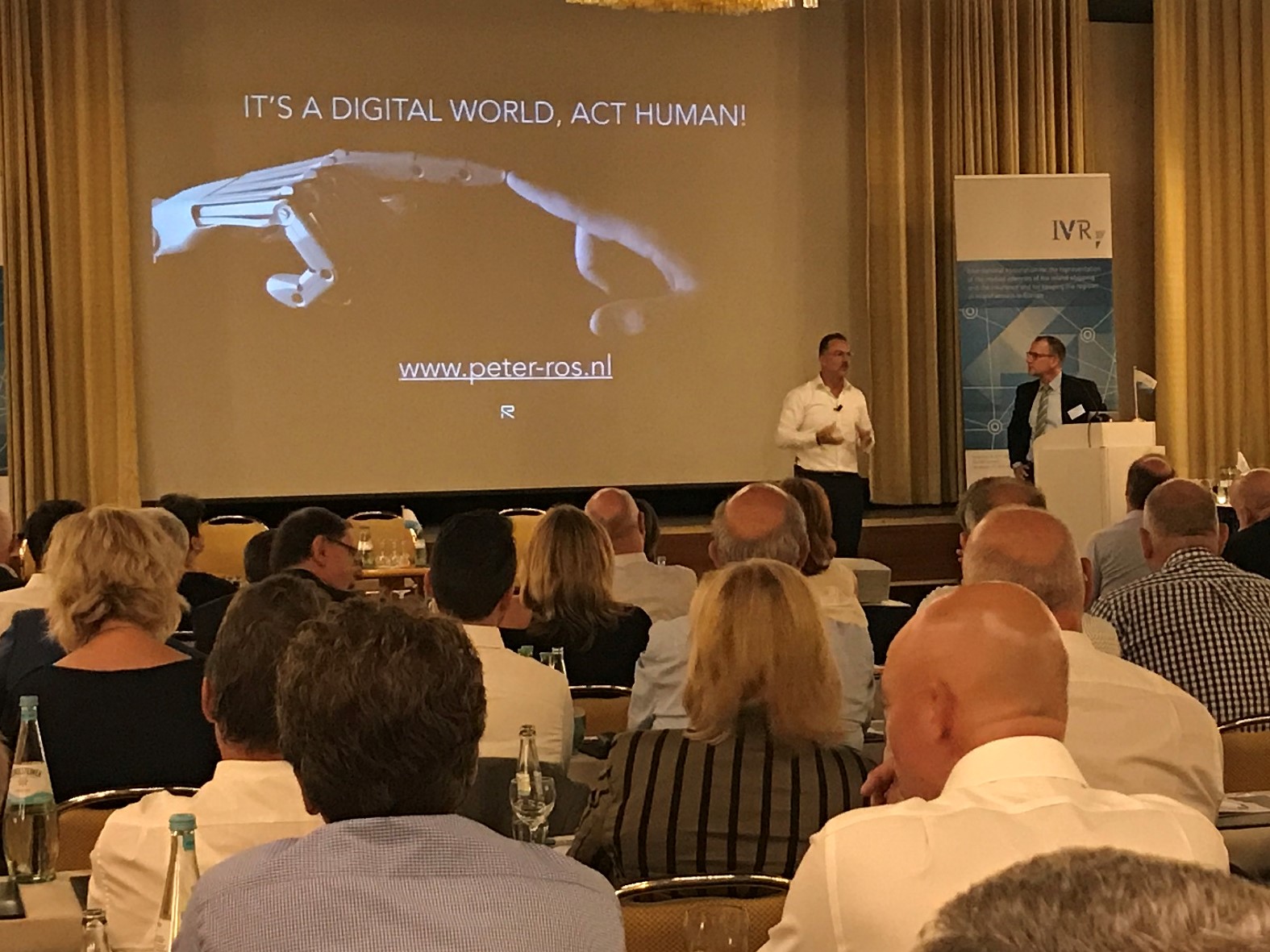 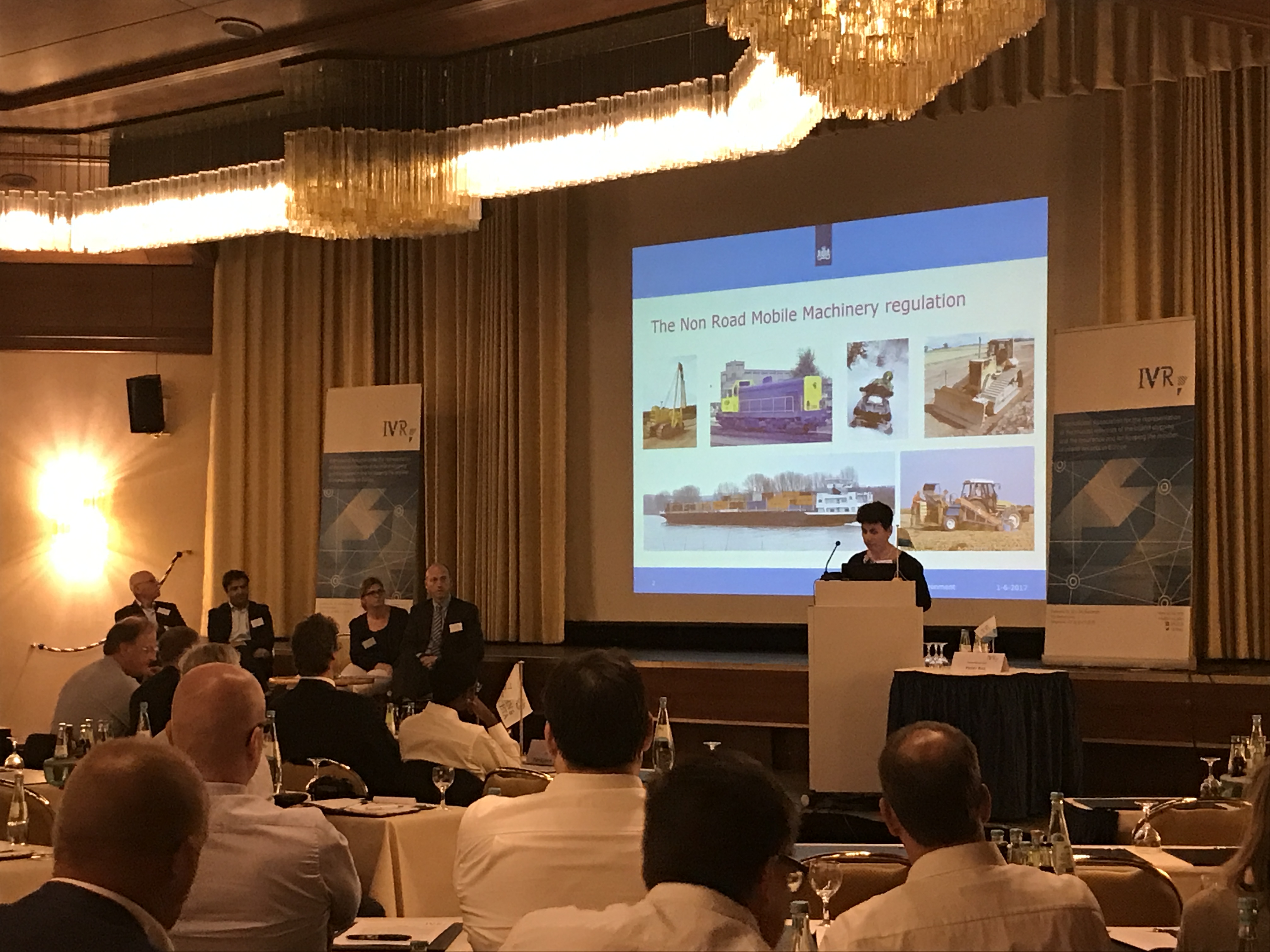 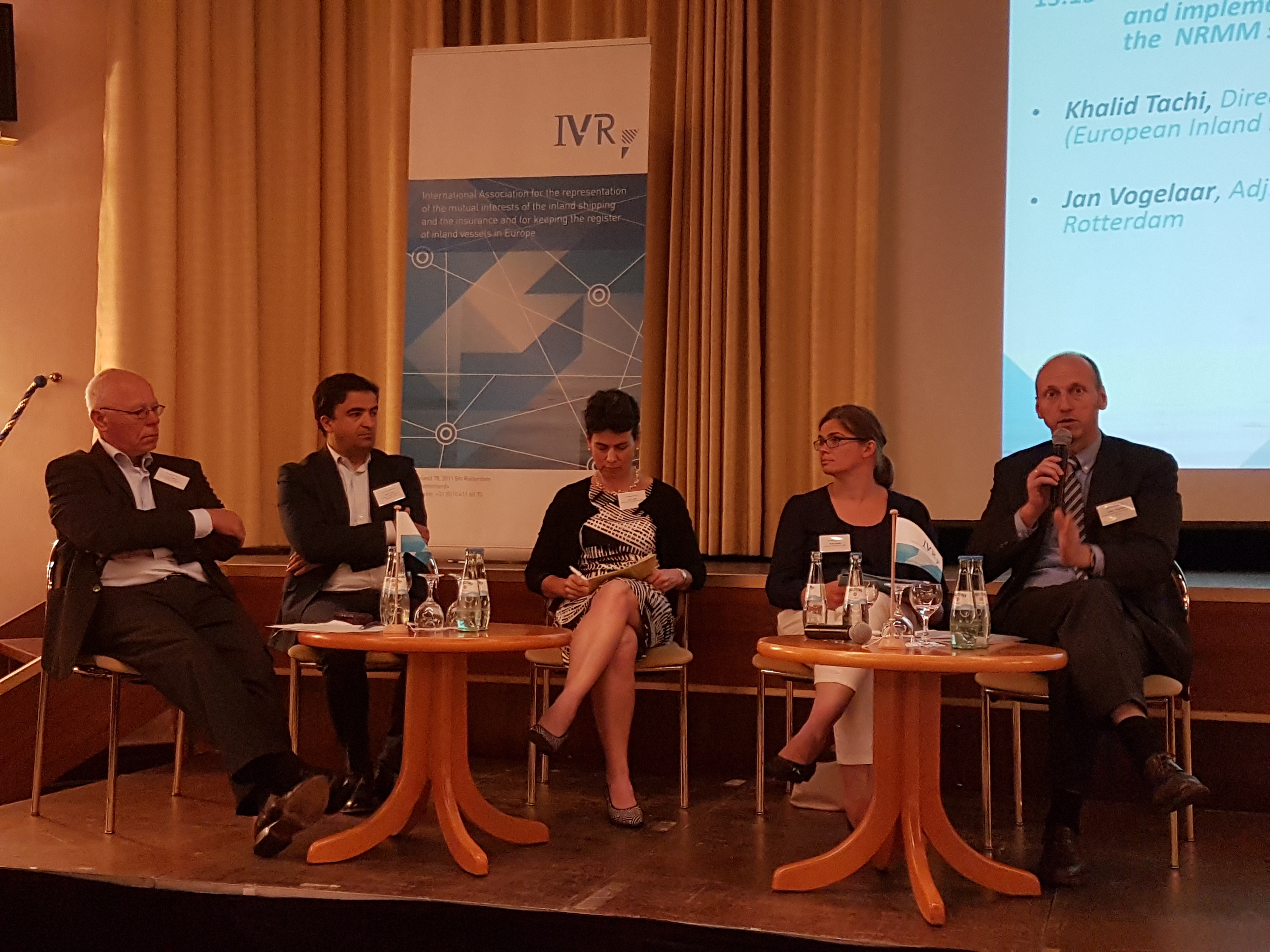 Part I Workshop
Subsequently a panel of competent speakers, led by moderator Lucia Luijten, Head of Inland Waterways Department of the Ministry of Infrastructure and Environment in The Hague, discussed the consequences and challenges for the sector in connection with the new emission standards for i.a. marine engines as a result of  the new NRMM Regulation.

Ms Luijten opened the first part of the workshop with her presentation ‘Innovation of IWT and challenges regarding new emission standards’. Philipp Troppmann, representing the EC’s Directorate-General for Internal Market and Industry, introduced the expectations, misunderstandings and uncertainties in practice as a result of the new emission requirements with his presentation ‘Non-Road Mobile Machinery’. After Marta Wolska, representing EC’s DG Move clarified the implementation of the new standards within CESNI.

The first part of the workshop was concluded by a panel discussion. Khalid Tachi, Director EICB and Jan Vogelaar, Adj. Director CBRB and Environment Coordinator EBU, took the lead and presented a number of relevant but also critical points, followed by a discussion round between the panel and the attendants on the pros and the cons of the new standards.

Part 2 Workshop
After a short network break, President Klaus Weber moderated part 2 of the workshop on how to protect the inland carrier from unknown hazards and container weights and container contents. Torbjorn Claesson of the Standard Club Europe presented, on the basis of known incidents, what could go wrong if the content of containers is incorrect or is not shown correctly. Dr. Johannes Trost, lawyer at LEBUHN & PUCHTA and member of the IVR Legal Committee, dedicated his presentation to security, liability and risk assurance in this area. 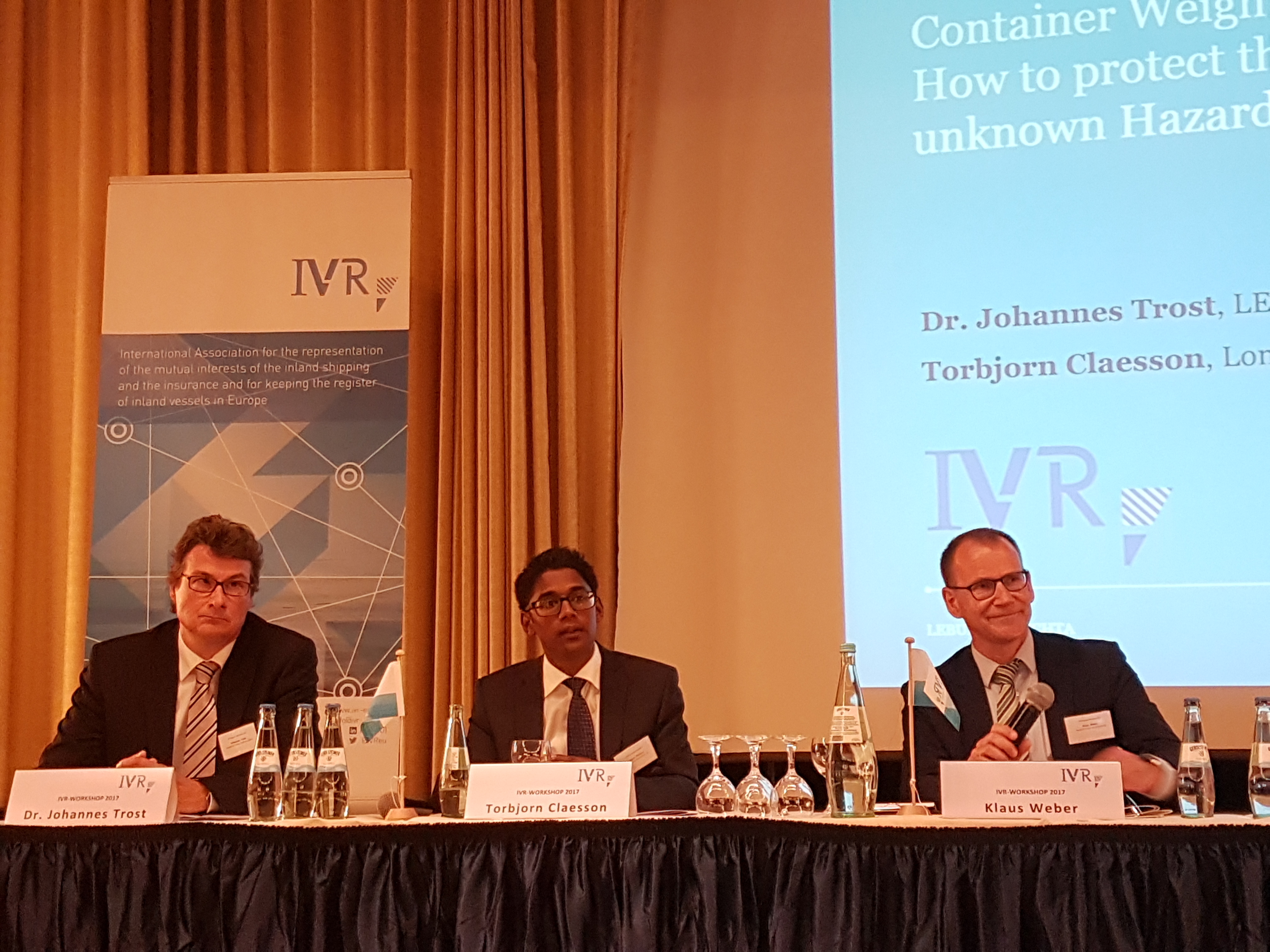 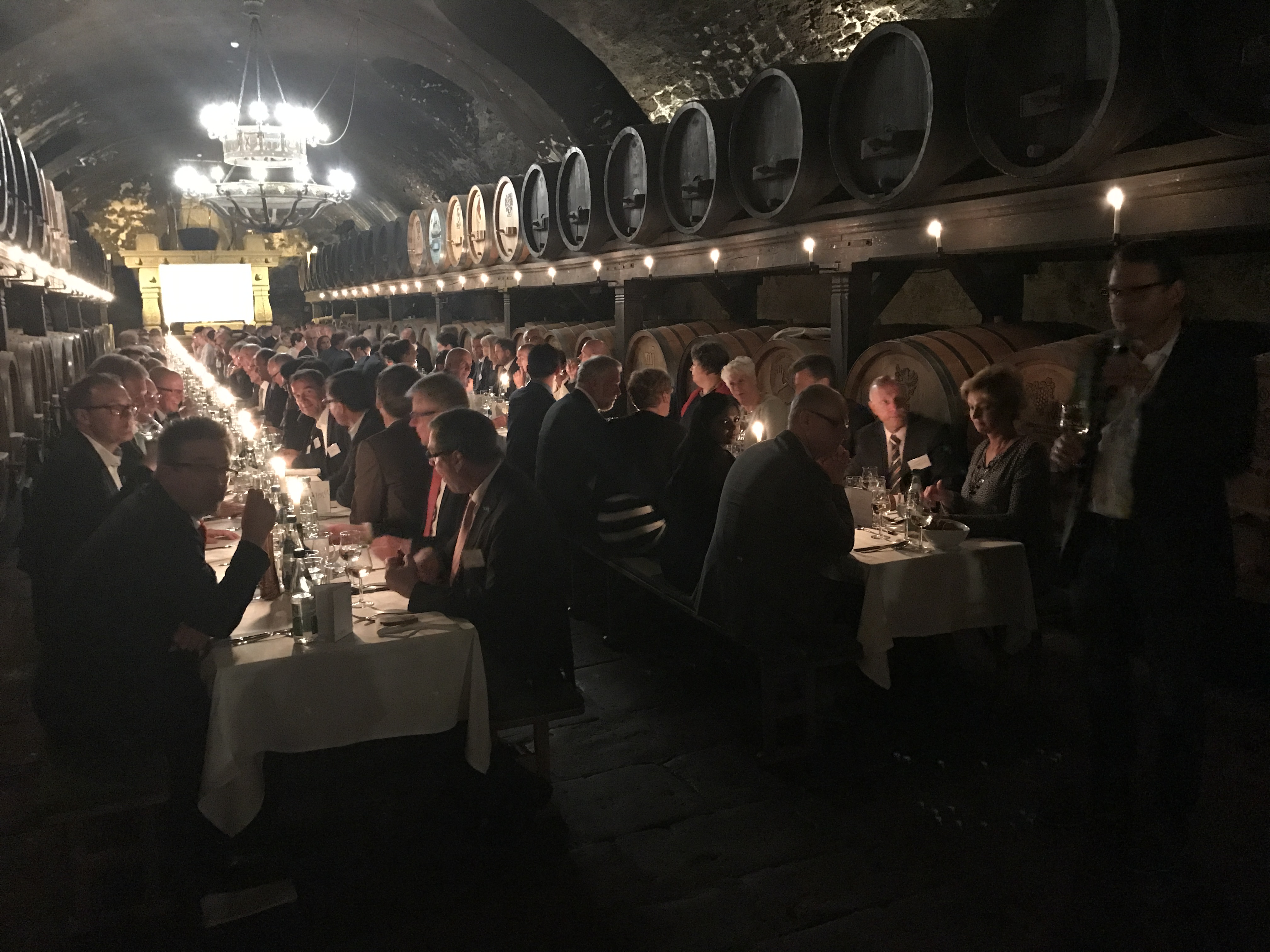 Network dinner in the wine cellars of ‘Staatlicher Hofkeller’

After an informative afternoon all guests were welcomed for dinner in the wine cellars of the ‘Staatlicher Hofkeller’ where wine has been produced since 1128. This special location provided an informal atmosphere where congress guests were given the opportunity to network.

The second day was marked by the General Assembly. President Klaus Weber opened the meeting with the introduction of the new Vice President of IVR, Norbert Plancher. Subsequently General Secretary Theresia Hacksteiner shared her presentation and speech on the importance of the institutional framework of inland navigation and the various ruling legal regimes. The Mannheim Act, in its 150 years next year, has contributed to the industrial development and prosperity of the Rhine States. Ms Hacksteiner called on the responsible international institutions in the field of inland navigation, in particular the European Commission and the Central Commission for the Navigation of the Rhine, to cooperate more closely in the interests of further development of inland navigation. 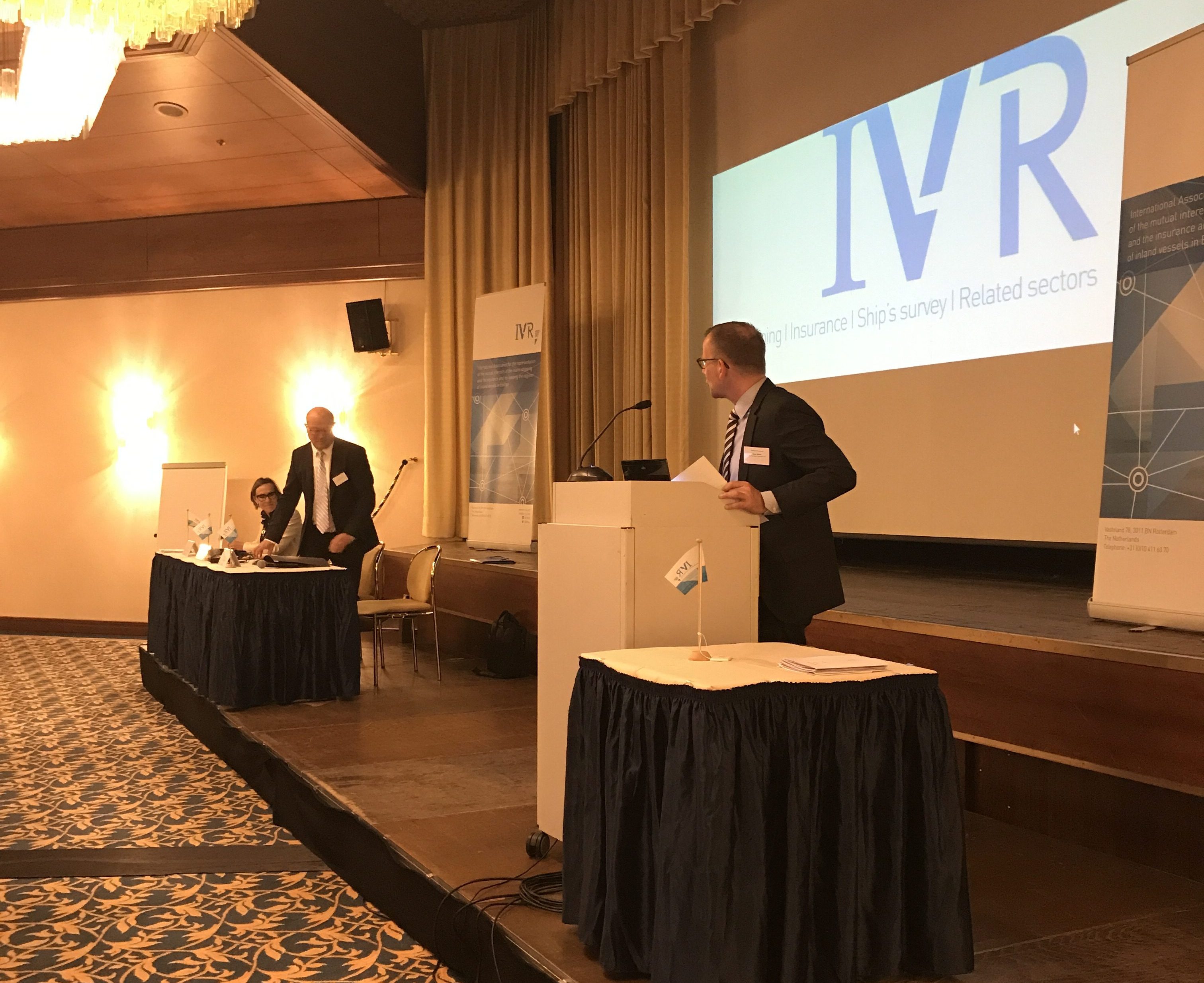 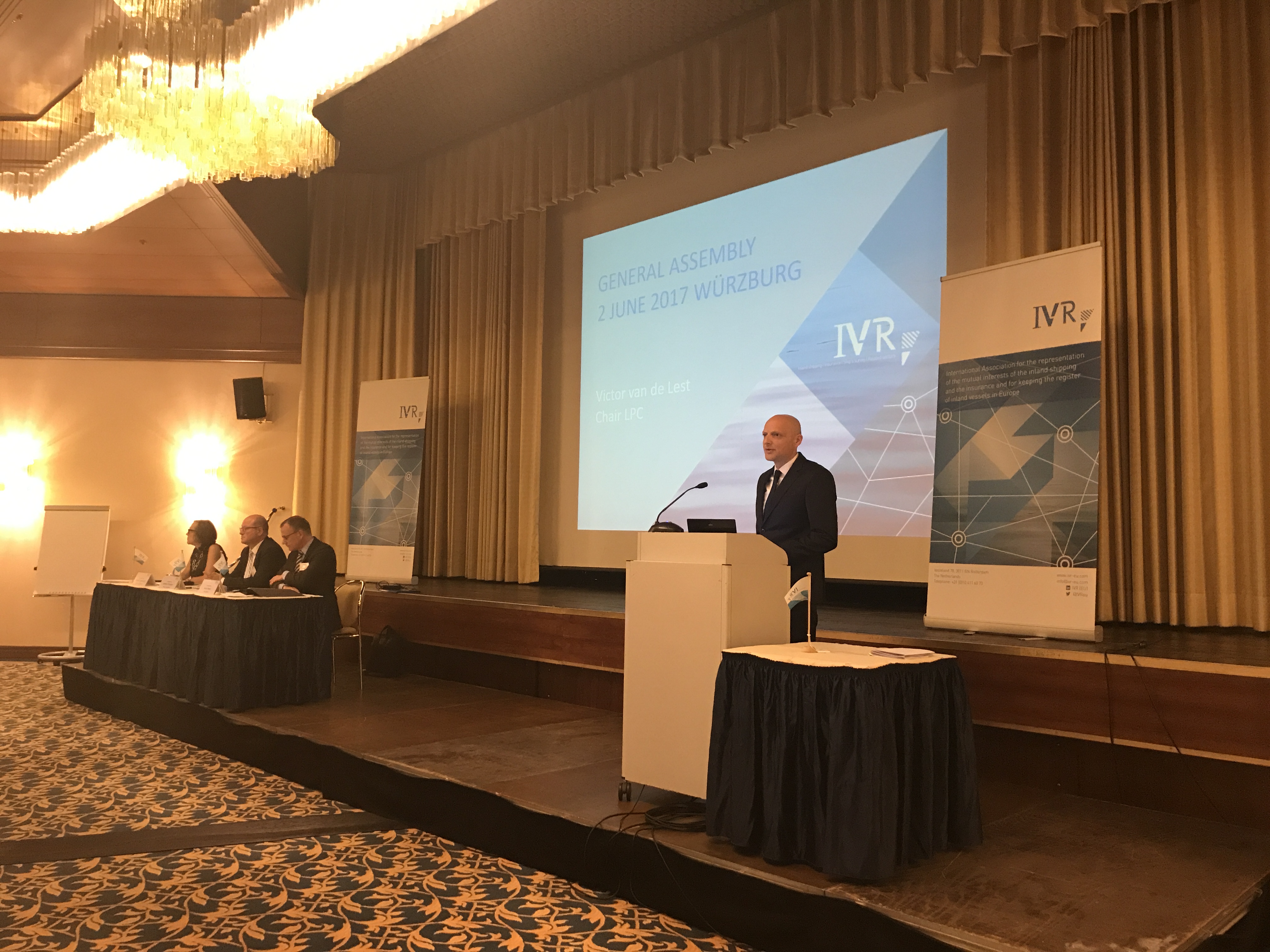 Reports of the Committee Chairs
The Chair of the Damage Prevention Committee, Victor van de Lest, reported about the work carried out by his Commission in the past year. Several ad hoc groups of the committee members  elaborated various technical leaflets that will be published shortly. He also shared the statistics on the number of damage prevention inspections and steering gear inspections of the past year.

The Chair of the Legal Committee, Dr. Martin Fischer, also informed the attendees about the work carried out by the Legal Committee. One of the main tasks was the  update of the collection of Judgements on CMNI and CLNI, as well as to organize a workshop on CLNI 2012 in cooperation with the Danube Commission. The later one was intended primarily to promote the ratification of the CLNI 2012 Convention in the Danube states, for which purpose the Guidelines CLNI 2012 could be offered to the relevant ministries. In addition, the chair announced the next Colloquium, which will take place in the spring of 2019 in Belgrade. The Legal Commission will i.a. focus on the organization of this event in the coming period.

Review of the implementation of the new strategy
The IVR board, IVR Committees and the secretariat in the past year engaged in strengthening the core tasks of the association. for this purpose IVR i.a. participated in exhibitions, organized workshops and worked intensively on a new professional and younger image. The new website went live a week before the congress and the new logo and corporate style were launched a month before. 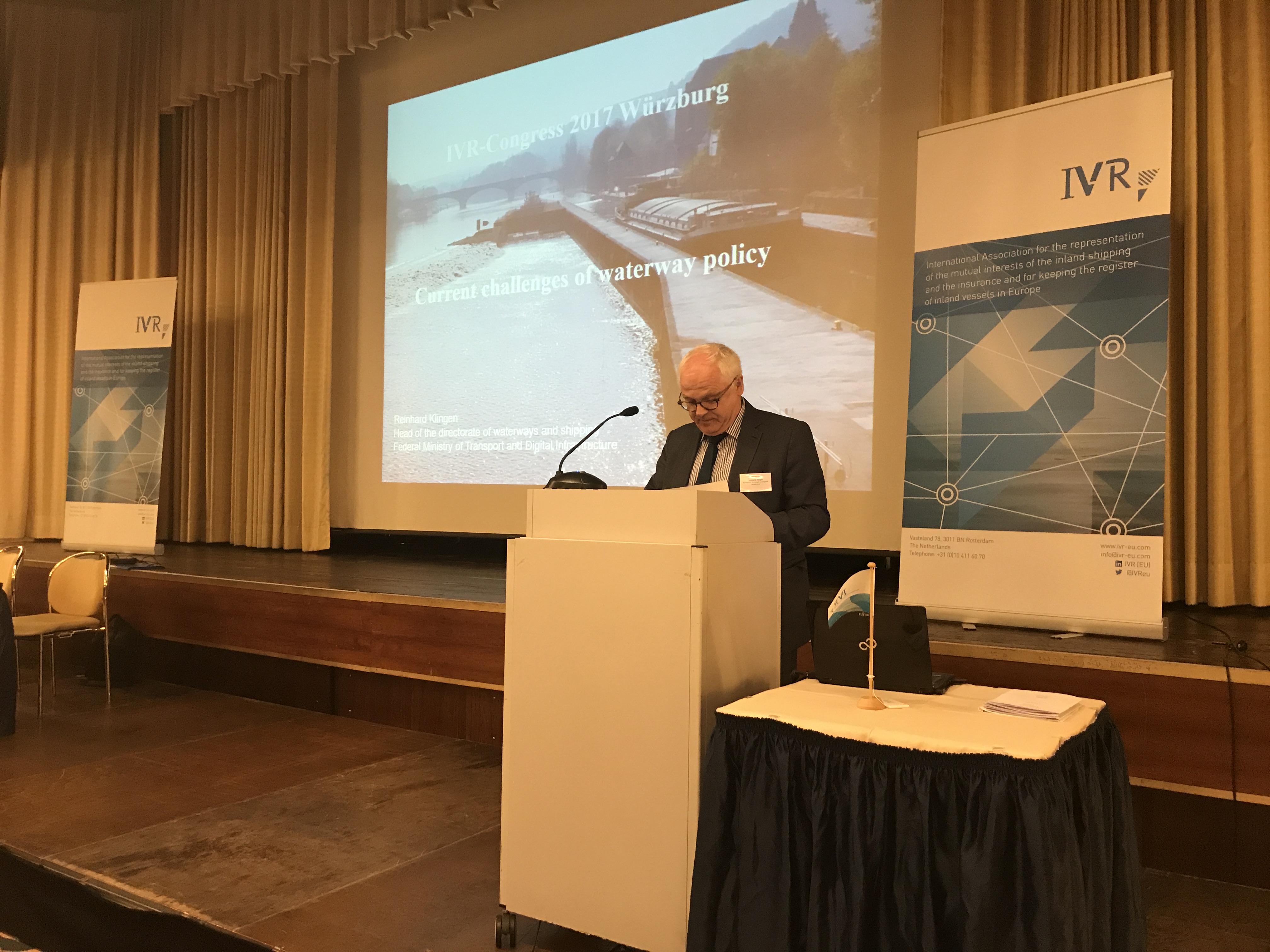 The effects of neglected maintenance of infrastructure
The General Assembly was concluded by guest speaker Reinhard Klingen, Head of Waterways and Shipping Department at the Bundesministerium für Verkehr und Digital Infrastructure in Bonn. He presented the consequences of overdue maintenance of infrastructure in the past years. The recently approved Federal Traffic Infrastructure Plan 2030 provides inter alia waterway maintenance measures and solutions for bottlenecks on the waterways. This includes 22 new projects, such as deepening of waterways and renewal or renewal of locks, including the Rhine, Main, Danube, Moselle and West German Channel. Due to the lack of qualified personnel at the waterway management, the money reserved for this year was unfortunately not available. Currently, 200 vacancies must provide for the solution of this administrative bottleneck.

Reception at the city hall and welcome by the Mayor of Würzburg and network lunch on the Main
The members and guests of IVR were subsequently welcomed by Mayor Christian Schuchardt in the city hall of Würzburg. In his speech he addressed the history of Würzburg and the importance of inland navigation in the city as well as the important role IVR plays in this regard.
Traditionally, the conference ended with a boat trip. During the cruise on the Main, the conference guests were able to lunch and network together for a last time. 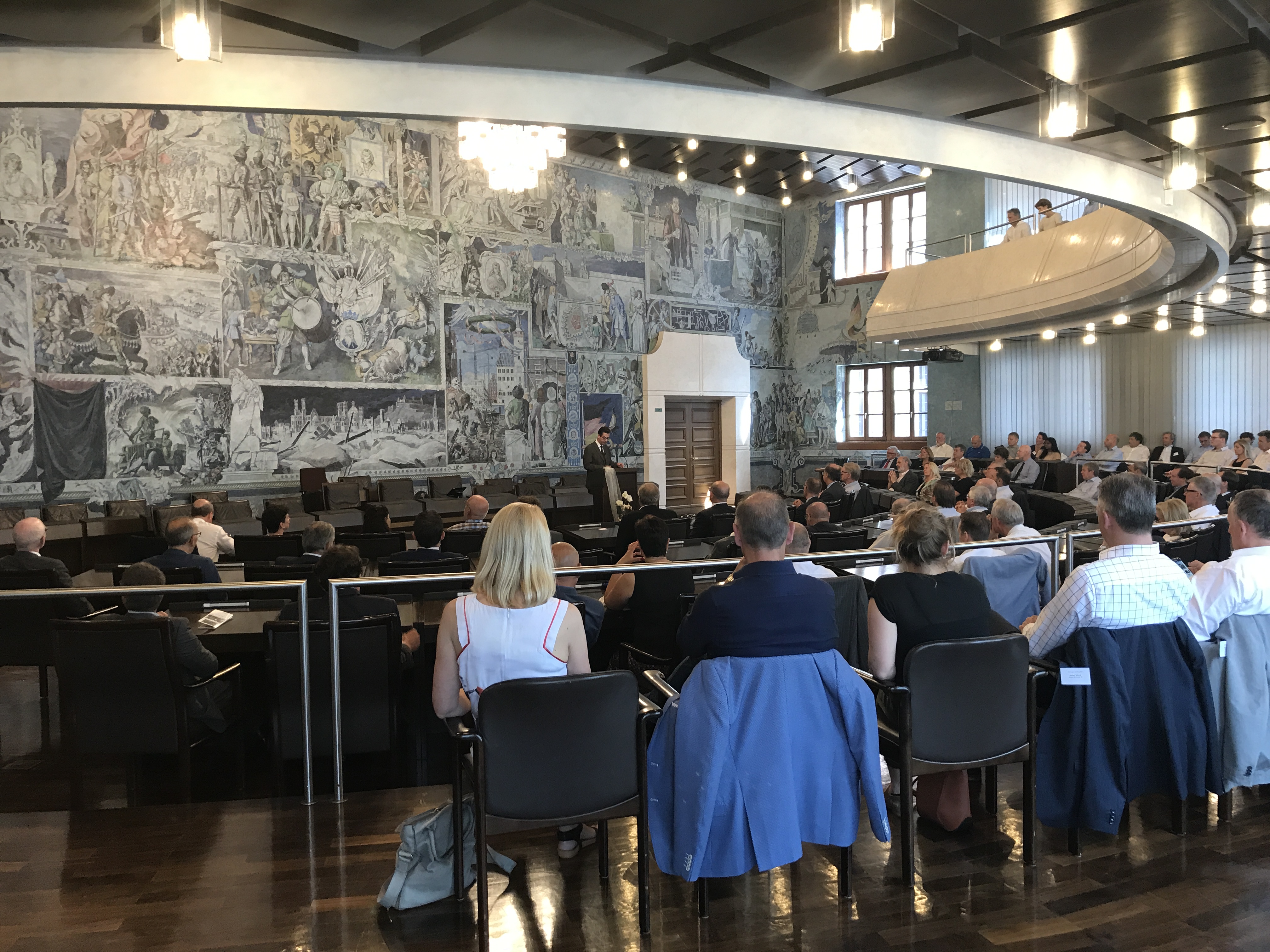 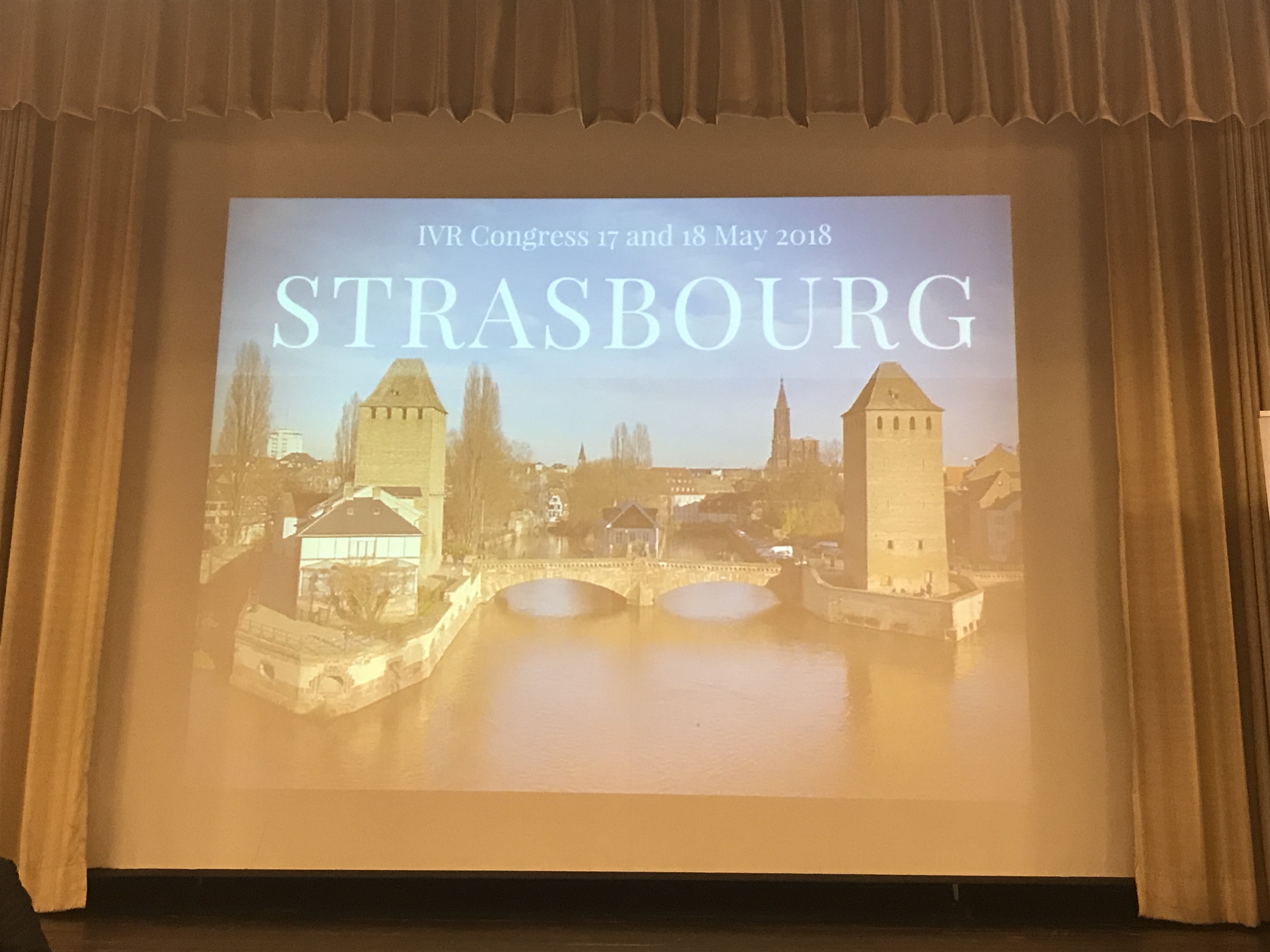 In connection with the 150th anniversary of the Mannheim Act, the IVR Congress 2018 will be held, at the invitation of the Central Commission for the Rhine Navigation CCR, in Strasbourg from 16th till 18th of May 2018.

With the help of your feedback we can continue to improve our services. Therefore it is highly appreciated if you could fill out our survey IVR Congress 2017. Thank you in advance for your time and effort. 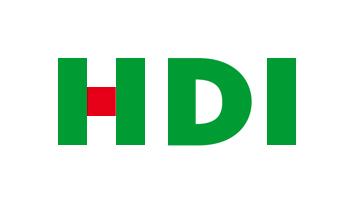